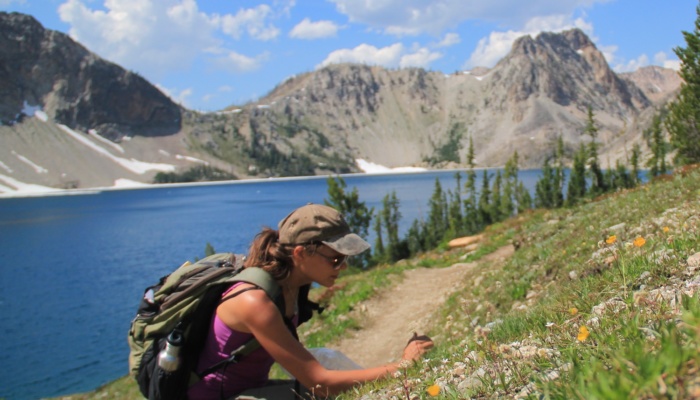 Women Who Inspired us in Biodiversity Science

In honor of March being Women’s History Month, the UFBI fellows decided to pay homage to some of the women in science who have inspired us. These women have helped set us on our career paths. They have encouraged us to push the envelopes of our own research. To them, and the many others not listed here, we are grateful.

Amidst the fires following the devastating San Francisco earthquake of 1906, one woman fearlessly ran into the California Academy of Sciences’ preserved plant collection, leaped over a chasm in the floor of earthquake-ravaged building, and retrieved nearly 1500 invaluable type specimens. This brave botanist, Alice Eastwood, moved these specimens to safety around the city as the fires spread and her own home and possessions were lost. These specimens, which are the designated reference for all plants sharing the same name, are fundamental to the identification and discovery of new plants, and if they had been destroyed they could never be replaced. And this heroic tale was not even Ms. Eastwood’s greatest contribution to

biodiversity and science. She was a self-taught botanist whose skill and expertise arose from sheer passion, interest, and dedication. She was at the forefront of scientific exploration in the Wild West, in a society that frowned upon women wandering alone in the woods collecting plants. Luckily for us, Ms. Eastwood cared little about social norms. She rode a horse and hiked with her burdensome skirts shortened to the scandalous height of her ankles while carrying a plant press on her back. Her dedication paid off. It was not long before she was highly regarded for her botanical knowledge, and even though she had no formal training, she was offered a permanent position at the California Academy of Sciences. While a curator at the California Academy of Sciences she rebuilt the collection from practically nothing after the 1906 earthquake. By the time she retired in 1949 at the age of 90, the collection had 350,000 specimens, many of which were her own collections. Her contributions as a woman in science to biodiversity and museum collections are indispensible and her love of botany and exploration are inspiring. For more information, and the source of most of my knowledge, check out the book, Alice Eastwood’s Wonderland: The Adventures of a Botanist by Carol Green Wilson.

From UFBI Fellow Joan Meiners, who studies the biodiversity and floral associations of 450 species of native bees in a California hotspot:

Long before the establishment of California as a state or even the prominence of biological collections, another woman was fascinated by the six-legged creatures who used plants as their homes and food. Maria Sibylla Merian (1647-1717), the daughter of a prominent German publisher, documented the life stages and morphology of insects and their relationships with their environments in exquisitely detailed engravings and watercolors. At a time when most people were content to believe that insects simply “spontaneously emerged from mud,” Merian collected insect eggs and painted them as they transformed into adults. Her careful work helped develop the idea of metamorphosis and, by documenting insects in their natural habitats and their associations with specific plants, was pioneering in the field of ecology. In accordance with expectations of her time, she married and moved with her husband to Nuremberg in 1670 where she gave drawing lessons to daughters of wealthy families in exchange for access to their elaborate gardens and the mysterious insects within. She published her first book of biological illustrations of these insects, with notes on their behavior, at age 28. When her marriage ultimately got in the way of her science, she found a way to escape it. In 1699 at the age of 52, Merian was funded by the city of Amsterdam to travel to the jungles of Surinam with her daughter to spend five years illustrating new species of insects. This

biodiversity expedition may be the first journey ever planned solely for the purpose of science, not to mention the first of its kind undertaken by a woman. Though she only spent two years there before contracting malaria and being forced to return home, her life and works have been foundational for centuries of entomologists, naturalists, ecologists, and women scientists, even if they didn’t know it. Despite her contributions to science, medicine, art, female independence, and recognition of the importance of her work during her lifetime, she was largely forgotten for centuries after her death. Fortunately, recent biographies of Merian by Kim Todd and profiles in the New York Times and The Atlantic have brought her back into the public consciousness so that she can inspire a whole new generation of adventurous, female, biodiversity scientists.