“Tropical Dry Forest (TDF) are among the most threatened and under-studied tropical forest in the world1, with less than 10% of their original extent remaining. They are distributed as patches throughout Latin America and the Caribbean, and unlike tropical rainforests (which harbor a large number of species), they have extraordinary levels of endemism and species with restricted distributions. A prime example is the TDF of NW Peru and SW Ecuador, which has long been recognized as an important center of bird endemism, the Tumbesian region. This region, with 55 species of endemic birds, has lost 95% of its original forest cover, and consequently, is considered a conservation priority due to the high number of endemic species and the severity of the human intervention..

Projected changes in precipitation regimes, predict that NW Peru will receive an increase in rainfall in future scenarios under anthropogenic climate change. If these changes continue, dry forest birds, which are adapted to dry climates, will be affected by this increase in rainfall, thereby increasing the risk to their populations. This is particularly worrisome as dry forest birds have already been affected by severe habitat loss and fragmentation. Under this scenario, I will explore how environmental factors, including seasonality and habitat characteristics, shape current TDF bird distributions and community structure in NW Peru. Further, using species distribution models, I will address how future scenarios of climate change will modify environmental conditions in TDF and forecast how these changes will impact bird distributions.

For the summer 2018, I plan to work at the Cerros de Amotape National Park, NW Peru, that is an ideal location for examining impacts of climate change due to the presence of a moisture gradient. In this gradient, I will sample birds and I will characterize habitat characteristics using a high-resolution spatially-explicit xLiDAR-derived estimates of forest structure. LiDAR is an active remote sensing technology that depicts the 3-D structure of ecosystems at an unprecedented level of detail. The LiDAR will be attached to a drone and will fly pre-loaded missions along the gradient. This will be possible thanks to the collaboration of Drs. Eben Broadbent and Angélica Almeyda from the Spatial Ecology & Conservation Lab (www.speclab.org) at University of Florida, who will join me at my field site and lead this operation. These forest structure data will be used to build specific bird-habitat models and then will be used as a basis for forecasting change in vegetation structure and birds under future climate scenarios.” 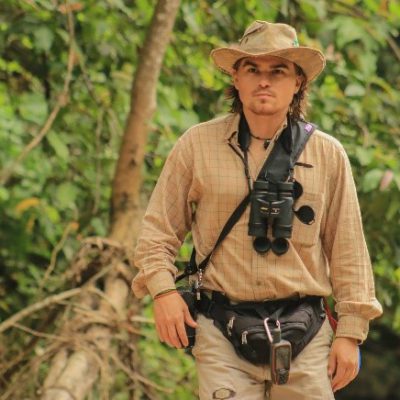 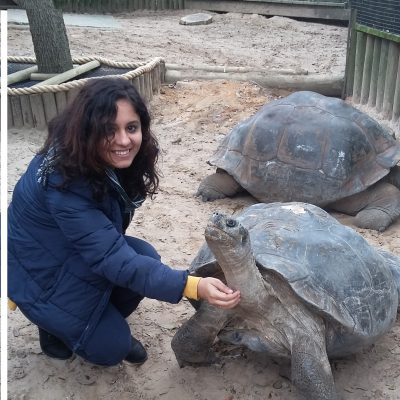 “My research involves developing statistical and computational approaches to understand the generation and maintenance of biological diversity, and my dissertation research involves studying evolutionary patterns of diversification at both the species and genomic level. I have been working to develop and implement simple approaches to diagnose whether models of diversification (e.g., BiSSE, HiSSE, and BAMM) are statistically consistent and if the speciation and extinction rates are estimable. I am also trying to evaluate biases in estimation of speciation and extinction rates and the performance of bias correction methods. Furthermore, I am working on developing a simulation approach to evaluate complex patterns of diversification on a phylogeny, and I will apply these methods in several avian clades.  The last part of my research will involve building phylogenies and looking at genomic signatures of diversification.

As a summer 2018 UF Biodiversity Institute Fellow,  I am planning on attending the Workshop on Molecular Evolution at Marine Biological Laboratory, Woods Hole, MA. This workshop has an intensive training format, and the students get a chance to work with renowned scientists and experts in phylogenetics and molecular evolution. This workshop will help me get a deeper understanding for different phylogenetic modeling and help me design specific lessons for other graduate students, directed towards organizing and assembling your data for hypothesis driven analysis.”

“High deforestation rates and associated forest fragmentation highlight this importance of understanding biodiversity conservation in mosaics of land-cover types. To improve our understanding of forest loss and fragmentation, and associated effects on biodiversity, I have been studying land-cover change in a region of coastal Ecuador considered a biodiversity hotspot. To date, I have been able to successfully identify forest types (i.e. old-growth, secondary, plantation forests) using Landsat images. There are important implications of being able to map forest types because, as expected, forest loses often translate into tree species loses. However, I identified some species (including various endemics) occurring and even benefi

ting of secondary forest. In regards to plantations, they are spectrally similar to forest, but are typically of a single tree species. It is therefore critical to differentiate plantation forest from other forest types.

For this summer project, I will collaborate with Jon Johnston, undergraduate student of the Wildlife Department at Humboldt State University. Jon has been monitoring wildlife using camera traps in an area in close proximity to my study sites. We are trying to answer the following question: How do changes in land cover and vegetation impact wildlife in a fragmented tropical dry forest landscape? To answer this question, I am developing two maps for the study area using the already previously tested approaches: a land-cover classification and an NDVI time series. The land-cover map will provide information on land-cover types and size of forest fragments in the area. The NDVI time series will show seasonal fluctuations of vegetation greenness. We expect to integrate our data to highlight spatially wildlife species presence and abundance in relation to adjacent land-cover types and temporally wildlife species presence and abundance in relation to changes in vegetation greenness. 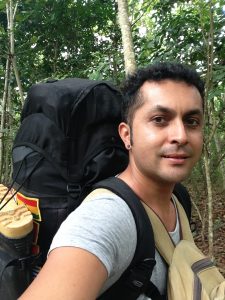 Department of Wildlife Ecology and Conservation 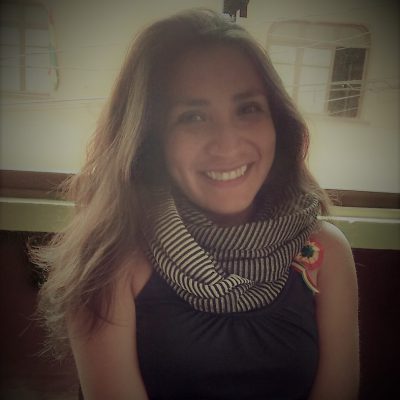 “During the summer, I plan on collecting field data on bat communities along a ~3000 m elevational gradient in the Andes of Bolivia, to examine how bat community assembly changes across elevations. I have monitored bird communities along this gradient for four years and now I will test some of the hypotheses derived from my work on a new taxonomic group: bats. Bat communities will be surveyed with acoustic monitoring, a technique that allows registering insectivorous bats, a guild often missed on bat studies. Field data obtained will be analyzed in collaboration with Dr. Bruce Miller (WCS Fellow) and will result in the first data set on Bolivian Andean bats at these high altitudes. Once back at UF, I will combine trait and phylogenetic information, bat census data and environmental data collected in my study sites, to test for the relative role of ecological and evolutionary processes shaping insectivorous bat assemblages across elevations. Furthermore, I propose to use bat assemblage responses to environmental variables to feed predictive models on how these communities would respond to environmental variation, such as that expected by climate change scenarios.

Bolivia is one of the least studied countries in the Neotropics with only a few studies that test the role of ecological and evolutionary processes in explaining Bolivian assemblages. Extending my study from bird assemblages to other taxa will greatly contribute to the knowledge and understanding of biodiversity drivers across elevations, particularly in the threatened Andes, which are especially vulnerable to climate change. As a Bolivian national, I am very excited by the opportunity of generating this data set and interacting with the pioneer on bat acoustic identification, Dr. Bruce Miller.”

“Land-cover change is a major driver of shifts in biodiversity across the planet. However, these changes are not limited to plants and animals. Land-cover change can also affect the diversity and community of the bacteria and viruses within organisms. As a UF Biodiversity Institute Fellow, I will analyze the effect of land cover on the prevalence and diversity of coronaviruses in little free-tailed bats (Chaerephon pumilus). I captured these bats across northeast Swaziland, a region that has undergone rapid and extensive land cover change and is currently a mosaic of savanna areas, sugarcane plantations, and rural settlements. At the UF Biodiversity Institute, I will analyze genomic sequen Through this fellowship I will also develop outreach materials and activities for the public based on my research. The topic of disease ecology is delicate since it could further demonize bats in the public’s eye. Working with the Biodiversity Institute, I will craft a message that demonstrates why it is important to study pathogens in bats, how such results may translate into a greater understanding of disease ecology in general, while also emphasizing the need for conservation and the benefits bats provide for people and ecosystems.”

Department of Wildlife Ecology and Conservation / Interdisciplinary Ecology, School of Natural Resources and the Environment 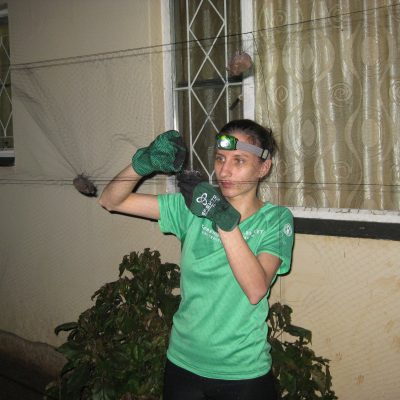