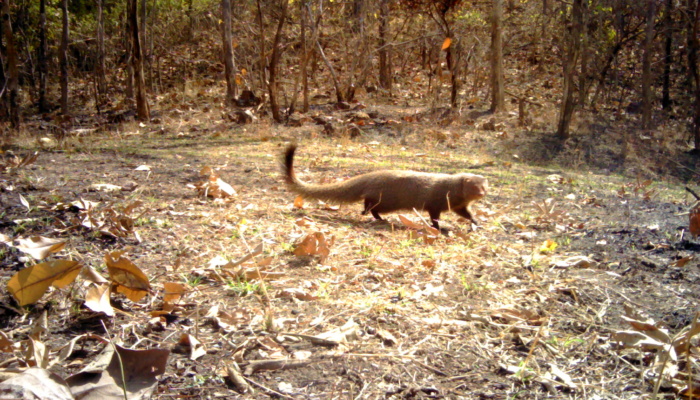 By Mahi Puri
With a career in research spanning almost a decade, most of my academic work has involved studying issues relating to large carnivore ecology and their conservation. Accordingly, my PhD research is also targeted towards identifying and prioritizing areas for restoration where large carnivores occur. Most of the carnivores that I study occur at low densities and are nocturnal. This means that the first step towards knowing their distribution required me to set up camera traps across a large landscape. Cameras equipped with motion sensors are widely used in ecological studies as they are non-invasive and generate tremendous amount of ecological data that would otherwise be difficult to gather.

While conducting my literature survey, I came across a paper by Di Minin et al. (2016) that prioritizes landscapes at a global scale for carnivores. This study ranks four of the species that I study in India among the top 15 large carnivores that are expected to experience the maximum range contraction due to land use change by 2040. Carnivores require large stretches of contiguous habitat to search for prey and mates. As more and more land gets converted for agriculture or other land uses, the habitat available for these carnivores would progressively shrink. Although seeing my study species ranked in this top 15 list was disheartening, it was not surprising. But something that I did not anticipate seeing was this – in the list of top 15 small carnivores that would experience the maximum range loss, 9 species are found in India!

One of the small carnivores listed from India is the Malabar civet. The last known record of its sighting from the wild is from the 1980s and since then, only a few skins have been recovered from a small town in Western Ghats. There is no other information about its occurrence from India. Other species in the list include a small cat, four species of mongoose, another civet, a marten and a fox. My study site, located in central India, falls within the range of four of these nine species – the Rusty spotted cat, Grey mongoose, Ruddy mongoose and the Bengal fox. All four of them were camera-trapped during my surveys designed to study large carnivores. Besides these, other small carnivores that were photographed by the camera traps include two species of civets, honey badger and jungle cat, and other small mammals like porcupines and pangolins.

I have been a part of several camera-trapping surveys across India, including the all-India Tiger census that occurs once every four years. Such amazing data is collected during these surveys, but because many of the small mammals are “by-catch”, they remain uncatalogued and unstudied for years (if not forever). Only a handful of scientists in India design studies with a focus on small carnivore ecology. We know so little about the conservation status of these animals because there are not enough programs that monitor their populations or their distributions with as much rigour and in a systematic manner. Data sharing has also not been a part of the Indian science culture. A recent study by Mukherjee et al. 2019 tried to address some of these issues by combining datasets from multiple camera trap studies across the north-east Indian landscape and examined the ecology of understudied small cats. Similar countrywide assessments would go a long way in cataloguing and analysing gigabytes-worth of camera trap data. What we need is the creation of a long-term database for monitoring distribution trends, range expansion and contraction for many of India’s understudied small mammalian community.

A single study such as mine, just covering about 500 km2 of a region around one protected area was able to capture nearly 1,000 photographs of small mammals. Imagine the amount of data that sits in the hard disks of researchers that study landscapes comprising multiple protected areas, some connected by corridors. What about all the by-catch data from the countrywide tiger census that has occurred four times now since 2006? There is so much untapped data and there is no excuse for why it is not being utilized more efficiently.