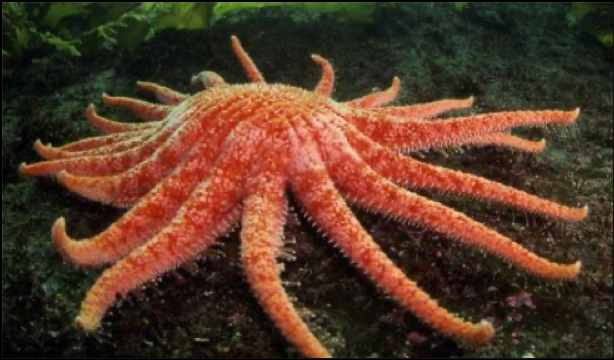 Predator diversity in the kelp forest

“I can only compare these great aquatic forests…with terrestrial ones in the intertropical regions. Yet, if in any other country a forest was destroyed, I do not believe so many species of animals would perish as would here, from the destruction of kelp” – Charles Darwin

A couple of weeks ago, as I was listening to NPR on my morning dog walk, the reporters began talking about a familiar system to me – the kelp forests of California! Quickly catching my attention, I realized that the radio story was largely summarizing the results of a recent study published in Communications Biology from a team of researchers based out of University of California, Santa Cruz. The study discusses kelp forest resilience off the northern California coast and the problems facing its recovery after an intense marine heat wave that hit the region’s waters in 2014. In addition, it provides an excellent example of how the diversity of predators may increase system resilience under changing oceanic conditions.

Kelp forests are beautiful. Imagine swimming through a forest under the sea where giant plants reach up to the surface 100 feet above you, except the plants are actually giant, canopy-forming algae called kelps. Smaller macroalgae, often bright red and full of small invertebrates, litter the rocks and pinnacles. Sea lions might be swimming past you, and you might glance a school of pacific barracuda passing through the kelp fronds. Although diving conditions in these temperate reefs can vary quite dramatically, when the visibility is good in a kelp forest, you can see all manner of fishes, invertebrates, and marine mammals living their lives.

Kelps (order Laminariales) are resilient to environmental disturbances and have evolved a variety of life history strategies to persist in exposed coastlines across the western North American shores and recover following dislodgement. In the northern California coast, kelp forests are primarily contrived of the bull kelp, Nerocystis luetkeana, which provides habitat for associated communities. This region is subject to frequent storms and high wave energy cycles in the winter that periodically rips out kelp from the benthos. However, during this time, Nereocystis gametophytes, which are microscopic haploid organisms previously formed from adult kelps, release eggs and spermwhich when fertilized, develop into sporophytes. Sporophytes are tiny kelps that then grow at incredibly high rates (up to 5” a day!) until they reach the surface of the ocean in the spring/summer.  This reproductive strategy allows bull kelp to persist and recover quickly after such storm cycles. (Springer et al. 2010)

Although kelps are well adapted to stressful environments, marine heat waves (likely a result of climate change) are threatening kelp populations throughout the world. Bull kelp requires cold nutrient-rich water for growth and recruitment, and high temperature anomalies can impede population growth. In 2014 the entire coast of California experienced a dramatic El Niño event which caused exceptionally warm water temperatures. This was a great time to be a surfer! But not such a great time to be a kelp. In northern California, this heat wave limited bull kelp reproduction and growth, and to this day populations are struggling to recover despite a return to favorable environmental conditions consisting of cold, nutrient rich-water optimal for kelp growth. Instead, many of these former kelp forests have undergone what ecologists call a regime shift, a switch to an alternate ecosystem state now characterized by high densities of sea urchins covering the benthos rather than beautiful kelp fronds foresting the reefs.

Urchins are often major players in coastal environments. Extremely well evolved, and covered in sharp spikes, these animals that are related to sea stars and sea cucumbers can have extremely strong effects on foundation species, such as kelps, that characterize ecosystems. In addition, some urchins can self-sharpen their teeth as they graze, and have been used by engineers as informants of self-sharpening tool technology. This makes them especially effective grazers and urchins can engineer the dynamics of systems by their herbivory on macroalgae. The purple urchins which have replaced the kelp forests in northern California have another interesting characteristic: they can sort of live forever, even when they are starved of food.

After the kelp die-off in 2014 following the marine heat wave, high adult densities coincided with an exceptionally large recruitment pulse of urchin larvae which provided the ingredients for an urchin population explosion at an especially stressful time for kelp populations. Urchins feed on kelps and this added stressor of high urchin herbivory coupled with low kelp reproductive success following the heat wave made for a series of unfortunately timed events for kelp recovery. However, these types of heat waves have happened before. Although the frequency of marine heat waves is expected to increase with climate change, and these can be tough on kelp reproduction, bull kelp has recovered from these types of events in the past even when coupled with high urchin recruitment pulses. So why did the system shift now?

The paper covered in the NPR story suggests that there is an additional component to this phenomenon that involves biodiversity. One year prior to the 2014 heat wave, a disease epidemic hit a voracious sea urchin predator: the sunflower sea star (Pycnopodia helianthoides) all throughout its range in the northeast Pacific. One hypothesis for the failure of bull kelp recovery in northern California, is that without the seastar present, urchins were freed from any population regulation and their populations exploded as result. The sea star is the urchin’s only real predator in this region, but that wasn’t always the case. Although this timing of events leading to urchin barren formation in northern California may appear to have begun with the disease epidemic that took out the urchin’s only predator, the biodiversity of California’s kelp forest was altered long ago in the 1800s with the extirpation of another voracious urchin predator: the sea otter. As a result of lowered predator diversity in the system, it is likely that the resilience of kelp to other stressors such as seawater temperature, disease epidemics, low nutrients, and a high urchin recruitment pulse, has been compromised.

So why not bring back some sea otters, let them do work on the urchins, and see the kelp recover after? Well when I said urchins can sort of live forever, there’s a caveat. They do so in a kind of zombified state, where they essentially have no gonads. The tasty gonads of sea urchins are what otters, sea stars, and other predators love to eat. You can also find it labeled as “uni” at your local sushi joint. So putting a bunch of predators in a sea urchin barren usually just causes the predators to move out and find a healthy kelp patch with more desirable gonad-rich urchins to munch on. In addition, moving sea otters to that part of the state is hampered by a healthy white shark population. It’s possible these urchins may experience a density-dependent disease epidemic, or a big wave event could hit the region and wipe them out. Some volunteer diving programs are coordinating manual urchin removals from select areas, but the efficacy of this for complete system recovery may be minimal given the wide spatial extent of these urchin barrens. For now, there isn’t an immediate or obvious solution in sight for restoring the kelp forest.

The case of northern California kelp forest recovery is relevant for several other ecosystems experience changes at different levels. Although the sea otter has long been gone from northern California (it has recovered in some areas south of this region), its loss didn’t manifest in the immediate demise of the kelp forest because the predatory sea star likely maintained the function of top-down control on sea urchins. We may not actually see the results of biodiversity loss for several years until a perfect storm of events, such as in California, occurs. But with climate change continuing to alter environmental conditions in the sea, the probability of such storms is likely to increase, and we may begin to witness the delayed effects of lowered biodiversity under such circumstances.