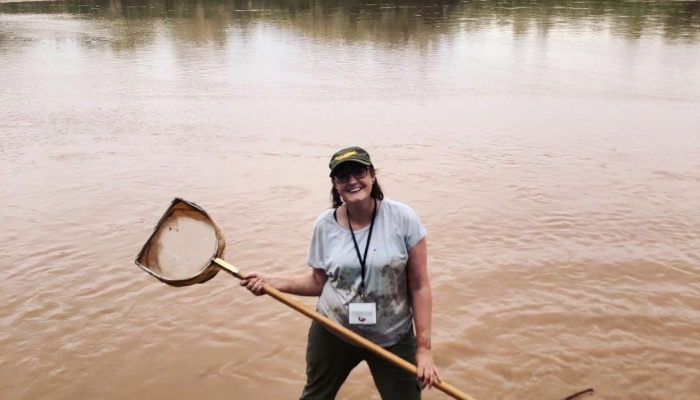 You are what you drink: stable isotopes and the fight against the illegal wildlife trade

The chemical elements that make up water, hydrogen (H) and oxygen (O), come in different varieties due to their molecular weight. These varieties, for example deuterium, the heavier variety of hydrogen, are known as isotopes. Isotopes are considered stable if they do not decay into other elements. The ratio of light to heavy stable isotopes in water follows predictable patterns in global precipitation. Rain that has just come in off the coast will have more heavy isotopes than a storm that has traveled inland. These patterns also exist across latitudes.

As organisms uptake the water in their ecosystems through drinking, respiration, and diet, isotopes are incorporated into their developing tissues, leaving a signature of where they’ve been. This principle has been used in human forensic analysis of remains of unknown origin by taking hair samples and looking at the isotope values along the length of the shaft. This can also be applied to items from the illegal wildlife trade, such as rhino horn and pangolin scales, when confiscated in a seizure, allowing conservationists and wildlife officers to get an idea of where these animals are being poached as well as provide insight into the networks responsible for transporting these items. By identifying at-risk areas, authorities can provide more resources for protecting those areas.

Additionally, stable isotope analysis can reveal if an animal has been taken from the wild or is being raised in captivity, away from its native habitat. This can illuminate situations of illegal captivity, as well as situations where a permit may indicate an animal was born legally in captivity, but was actually poached from the wild. The latter was shown for yellow-crested cockatoos at market in Hong-Kong, a species with fewer than 2,500 remaining in the wild in a study by Andersson et al in 2021 and highlights the importance of this tool for combating the illegal wildlife trade.

The advancements in stable isotope ecology applications are an exciting prospect in the fight against illegal wildlife activity. These applications also include understanding movement and migration patterns, analyzing ecological niche over time and between species, reconstructing paleoclimate and life histories of long-extinct animals. The field of stable isotope ecology continues to expand and become more refined as our understanding of isotopic patterns and biochemical pathways grows. This is a field that brings us back to the very building blocks of life to answer complex ecological questions and save species.