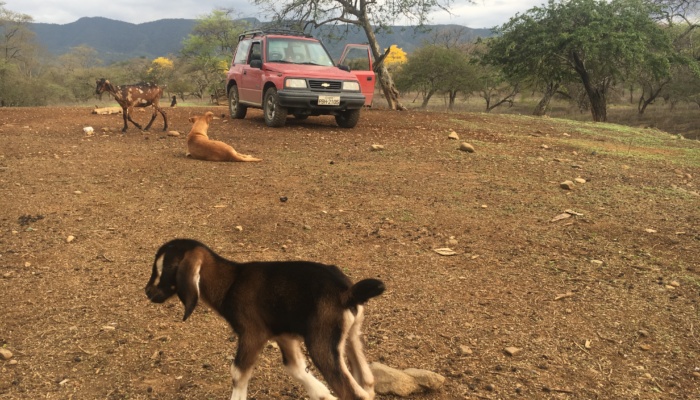 How did I get here? Ecuador’s birds and changes in land-use

Grad students follow different paths to get their research on track. Some might have a clear, specific and feasible research idea from the beginning while others follow a long path full of changes Maybe most, like me, are somewhere in between.
I realized my research interests during my undergraduate years. Coming from a hyper-diverse country — Ecuador — with many conservation threats, I became interested in how species cope with anthropogenic land-use change. I learned that species could respond differently to climatic stressors and anthropogenic land-use change.

Environmental heterogeneity, for example, may constrain the dispersal of habitat specialists whereas generalists with higher environmental tolerance may be less constrained. Dry-forest species may also be more tolerant of disturbance because they are better adapted to more extreme variations in environmental conditions that are intrinsic to the habitat than wet-forest species. As a result, anthropogenic disturbance may have a more negligible effect on dry-forest communities, but could lead to the homogenization of the avifauna by replacing wet-forest specialists with dry-forest generalists. The question that arises is: what are the mechanisms behind this pattern?

I decided to look for answers in an environmental gradient. A good environmental gradient for ecological studies should be extended in a relatively short space to facilitate logistics while controlling for any factor other than the one we want to measure. If we’re going to see the effect of precipitation, the gradient should be relatively constant for other factors such as altitude or latitude. Fortunately, I had some idea where to find this. In the Pacific region of Ecuador, we can go from rainy to semi-deciduous forest in ~38 miles. The altitude in this region does not exceed 800 masl (not an actual barrier for most birds), and this transition is close to the equator, so latitude is not a big concern.

The Pacific region of Ecuador lies in a hotspot, an area with high diversity and endemism. In a region with more than 700 species, it would be unfeasible to work with the whole community for my research. We chose a pair of conspecific species with the right characteristics and used them as a case study. We selected the closely related Banded-back wren and Fasciated wren. Both specialized in disturbed areas, but the former is restricted to the wet and the latter to the dry region. Both are relatively common, which is essential if I want to get enough samples.

Cool! At this point, I had to go back to my question. What are the mechanisms that make dry-forest specialists expand into wet regions? I could not test for all possible mechanisms if I wanted to graduate at some point. Here is where theory comes to help. Interspecific competition has been long considered one of the main species interactions in ecology (1, 4), at least in the temperate zone. Besides, these wrens have complementary distributions, which are characteristic of competing species (5, 3 ,2). Given that, we thought interspecific competition was an excellent mechanism to start.

What are the measurements?

Luckily, we are dealing with very territorial birds, and aggressive behaviors — an indicator of interspecific competition — are relatively easy to observe. The most common technique to measure territoriality in birds is through playback experiments. Playback experiments consist of exposing a bird or group to inter- or intra-specific songs and observe aggressive behaviors. I was lucky because my advisor Scott Robinson is an authority in the subject.

I started to carry out a bunch of these experiments to test what works the best. After a while, I got my experiment designed, but I also observed that it was tough to tell them apart in the contact zone. Sometimes it seems that I got individuals with plumage of both species in the same group, and I realized that these species might unexpectedly be hybridizing which made things more complicated. I had to collect tissue samples and do some population genetics to figure out what was going on. What I did then in the field for almost a year was to play some inter- and intra-specific songs, register behaviors and catch them after. Yes! Catch those same birds that I was bothering with playbacks which seemed to be the best method. These are smart birds, and mist-netting alone was not enough. I developed an exquisite and sophisticated technique consisting of flailing my arms to scare them into the nets. It turned out to be very effective!

If they are hybridizing and competition favor the expansion of the dry-habitat specialist, then I might observe some genetic introgression of SNPs from the dominant species to the subordinate one. Of course, the processes can be more complicated than that. It may be so that competition has nothing to be anything. Maybe I was a terrible birder, and I could tell these species apart — very plausible idea — or there could be introgression from the subordinate species into the dominant one because competition has nothing to do with this.

What have I found so far? It seems the dry-habitat specialist is far more aggressive, according to the preliminary results of the playback experiments. Did I find some introgression of SNPs of the Fasciated Wren into the Banded-back Wren? My preliminary analyses suggested that is the case, although still more and better analyses are needed. I still have work to do and questions to answer. My research is a work in progress, so if you have questions, suggestions or comments, I would be thrilled to hear from you.