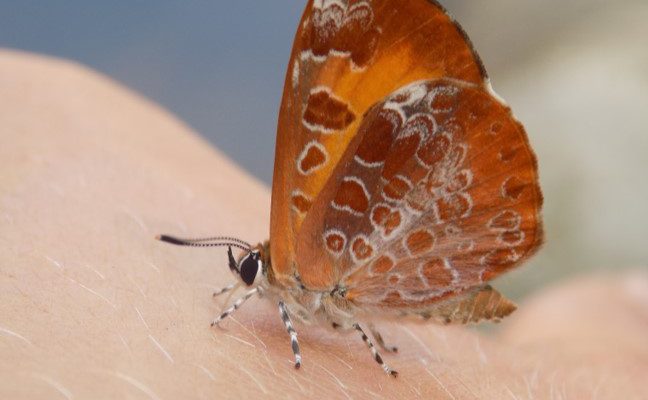 Insects are the most specious group of organisms and provide a variety of ecological services. At any given time an estimated 10 quintillion (10,000,000,000,000,000,000) individual insects may be alive. Right now, there are around 1 million described species of insects with most still being undescribed. Conservative estimates suggest that there are 2 million insects, but estimates extend to 30 million! For my time as a University of Florida Biodiversity Institute Fellow, I will be focusing on documenting the diversity of one particular insect group in North Central Florida: Lepidoptera.

Lepidoptera is an order of insects that includes butterflies and moths. In North America, over 10,000 Lepidoptera are described. In Alachua county alone, over 800 species of moths have been documented both by renowned Lepidopterists and through community science efforts posted on iNaturalist. Polyphemus moth: One of the largest moths found in Alachua county

The rich diversity of life history strategies of butterflies and moths consistently dazzles me.

Some moth species have aquatic caterpillar stages, where adult moths lay eggs on or near aquatic plants. When these eggs hatch, the caterpillars eat and burrow into the stems or roots of the plants. Some of these caterpillars have breathing gills, while others are able to spend weeks underwater despite not having gills. Other caterpillars are carnivorous and may eat small invertebrates from tree snails to aphids. Harvester butterfly: The only butterfly in the U.S. that has a carnivorous caterpillar life stage

Lepidoptera have also adopted a number of strategies to avoid predation. These adaptations include being toxic (think Monarch butterfly), mimicry (think Viceroy butterfly), and being venomous (think flannel moth caterpillar). If you are interested in exploring the local biodiversity around you, I encourage you to keep your eyes peeled for butterflies and moths. Butterflies are best observed with close focusing binoculars in open areas with plentiful open flowers. Moths are best observed by setting up a light in front of a sheet. If you want to document what you observed and leverage the expertise of other community scientists interested in Lepidoptera to help you ID your observations, I encourage you to create an iNaturalist account. Giant swallowtails fluttering as they nectar.