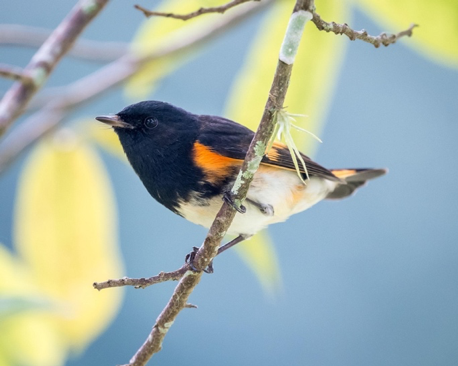 It’s All About Scale

Everything we observe depends on the scale of that observation, and this holds true when studying biodiversity. This concept has become one of my main fascinations as a scientist and is the focus of my research. Scaling in biodiversity happens across multiple dimensions. These dimensions span across space (county to continent), time (months to centuries) and biological organization (leaves to plants to forests).

At local spatial scales (4-hectares) in the northeastern United States, the Least Flycatchers (Empidonax minimus) negatively affect distributions of the American Redstart (Setophaga ruticilla ) through competition, but at regional scales, their distributions are positively correlated with one another possibly due to habitat selection (1,2). This is one of many examples that showcase how different biodiversity patterns and processes are scale dependent.

The importance of scaling 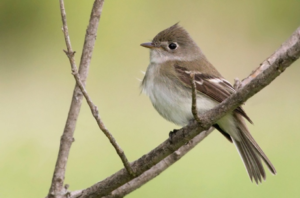 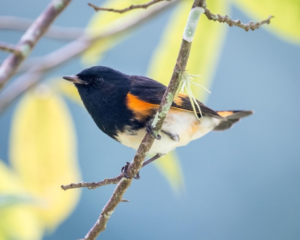 Observations at one scale are not comparable to observations at another scale. This can lead to conflicting results in the context of human impacts on the structure and organization of biodiversity. For example, at local scales, research has shown that plant diversity has not significantly decreased across the planet in areas repeatedly sampled across 5 to 265 years (3). However, at global scales there is evidence of large extirpations and extinctions in seed-bearing plants at rates ~500 times higher than expected under natural conditions (4). These conflicting results are a product of the complexity of biological phenomena that occur at different scales and our inability to unify these interpretations within a single research framework.

An exciting direction that scale-based research has delved into is the potential of scaling up biodiversity-ecosystem relationships. Ecosystem functions are processes in the natural world that ultimately provide key goods and services to human beings (e.g. marine fisheries, nutrient cycling). The link between biodiversity and the stability and strength of ecosystem processes has been well studied through local-scale experiments. However, scaling up this relationship between biodiversity and ecosystem functioning (BEF) has been difficult as only recently have we seen the assessment of the BEF at global scales (5). Scaling approaches can provide a theoretical framework for future predictions across scales for the BEF. This is extremely important considering the intrinsic and economical value ecosystems around the world contribute to all human beings. 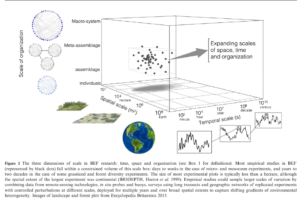 The lack of biodiversity-ecosystem functioning studies done at larger scales as shown in Figure 1 of Gonzalez et al. (2020).

While scaling has often been viewed as a hurdle to assessing biodiversity, it can actually be used as a solution. The development of scaling approaches to biodiversity can remove the effect of scale and help explain the complexity of biodiversity in a more simplistic format. One example of how scaling approaches aid the assessment of biodiversity is seen with species-area relationships (SARs). A SAR is qualitatively described as an increasing trend of species richness with increasing spatial area that saturates at larger spatial scales. It is one of the few patterns in ecology that has been called a general “law” (6,7). The quantification of how diversity scales across area, and most importantly the predictability of this scaling, can indicate mechanistic processes (e.g. environmental filters) that influence the amount of biodiversity found at different spatial scales.

Scaling relationships or scaling functions like SARs have been extensively used in the development of nature reserves, extinction forecasting and gauging the effects of habitat fragmentation (7–9).

However SARs may also be scale dependent as the rate at which species diversity increases across area can change across spatial scale (7). For example, at a certain spatial scale evolutionary processes such as speciation may become the predominant drivers of the increase in rate of species diversity across area. As such the SAR can have multiple points of inflexion in its trend/curve. 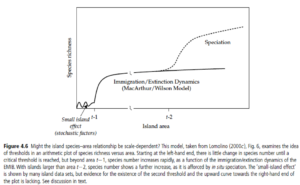 Scale dependency in the species-area relationship as seen from Figure 4.6 of the textbook Island Biogeography: Ecology, Evolution, and Conservation7.

Scaling is an exciting facet of biodiversity research with potential to help link both applied and basic research towards a unified framework.

Do scaling functions allow us to fully explain the structuring of biodiversity across space, time and biological organization? Not quite, but they do explain some of the complexities that are observed in nature (due to ecological or evolutionary processes) and show potential to simplify these complexities into an elegant and simpler format. While scaling patterns across multiple dimensions have been well studied and identified, the future of scaling research will need to emphasize the mechanistic underpinnings and predictability of these patterns to better serve the current and future state of biodiversity.