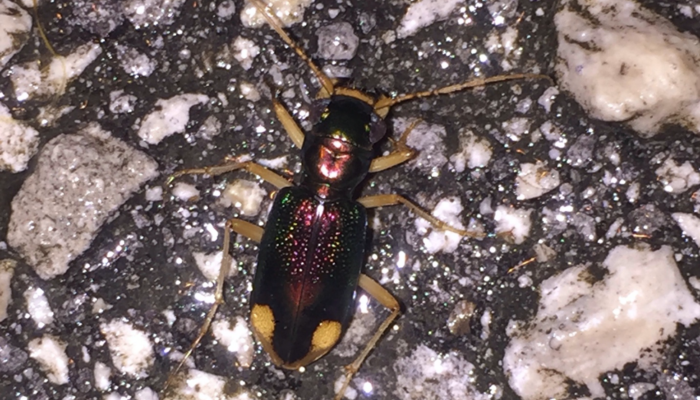 Diversity in the Dark

I began my training as a plant ecologist when I moved to Florida in 2014, and I have been honing my craft here ever since. As in many fields, my botanical training allowed me to look at the world differently. Before, I would have characterized Florida’s natural landscapes as a tapestry of green texture; now, the details of that tapestry have become my focus. These days, as I walk around anywhere, I see how a plant holds itself, how its leaves are arranged, any pops of color from flower or fruits, and even the slightest nuances of its shade of green. Moreover, I have started to call these fellow earthly beings by name. All of this is a say that a walk outside is now more like a real-life I Spy search.

Since the beginning of the pandemic, I have sought cool(ish), quiet solitude that led to my now beloved after-dark walks around the University of Florida campus. During these walks, the familiar verdant backdrop shifted into darkened shadows against the night sky and I began to discover an entirely new diversity of sounds, smells, and creatures that I would have overlooked if captivated by my botanical familiars. Over the course of my next few blog posts, I want to focus on the immense biodiversity Florida hosts, and I can think of no better way than to start by telling you about how I (re)discovered a world I had overlooked in my own backyard. 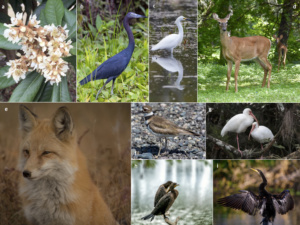 My ventures to campus began early last spring in an effort to connect with some sort of schedule un-interrupted by the events of 2020. Watching the emergence of the world’s largest occupied bat houses is as spectacular the first time as the hundredth. The more I returned to watch the bats, the more I realized that across the street from the bat houses Lake Alice hosts her own nightly spectacle: dozens of wading birds returning from their daily foraging to the safety of their tree roosts. Shortly before the appearance of the bats, cormorants, little blue herons, snowy egrets, white ibises and anhingas would pile into their cypress roost like an impossibly full clown car. Nosily, they would vie for their preferred branch; squabbles almost always ensued and late arrivals were relegated to sub-optimal branch positions for the remainder of the night. Around the same time, there was often the iconic hooting (“who cooks for you?”) of Barred Owls, and I was sometimes lucky enough to spot one silently swooping from one branch to another.*

As the roosting birds grew silent and the ribbons of bats faded into the darkening sky, I would begin my circuit of the southwest side of campus. Some of my crepuscular and nocturnal companions were expected, like the raccoons that darted to or from storm drains or the opossums that carefully walked along the chain-link fences, feeling for gaps. Others elicited a gasp of amazement every time I encountered them. On multiple occasions small groups of deer grazed in grassy areas and a pair of foxes pranced around in the shadows. During my most recent fox sighting, they had developed thicker, more luxurious winter coats to contend with the cooling temperatures. By far my favorite discovery this year, though, was the Carolina Tiger Beetle (Megacephala carolina)†. On evenings following Summer rain, these creatures flash iridescent purple and green against the wet sidewalk. At about the size of a Tic-Tac and surprisingly speedy for their small stature, it took quite a few attempts to get a picture of this dazzling species. Tiger beetles are so named because they are fierce hunters; you can check out some of the other amazing tiger beetle species found in Florida here. 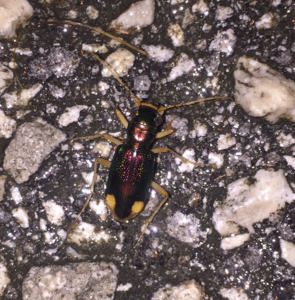 Music (and Fragrance) of the Night

One of the biggest differences between daylight observations and those that occur after dark is the trade-off between sights, sounds, and smells. Nature’s nightly soundtrack at UF begins with a layer of crickets chirping and cicadas buzzing. If you listen closely, you start to hear intermittent chirping from bats flying through the trees. The majority of bat echolocation is ultrasonic containing sound wave frequencies far higher than those interpretable by the human ear. However, these pulses of sound can be slowed down so humans can hear them (check out what the bats of UF sound like here). During the spring, Lake Alice and the comparatively crushing darkness of the Natural Areas Teaching Laboratory resonated with a deafening symphony of frogs and toads calling to impress potential mates. As the year progressed and summer became fall, loquat trees began to bloom, their white flowers emitting a strong, sweet perfume that attracted pollinators under the cover of night. During the day all sorts of bees and butterflies are attracted to these trees, but I had no idea that an equal or greater share of the pollinator diversity (wasps, moths, flies, and more, I am sure) visited under cover of night. This winter, the call of killdeer, a bird species I am most familiar with from the New England shoreline, emanated from the inky darkness of in the agriculture fields south of the Florida Ballpark. Sounds and fragrances, rather than sights, revealed a flurry of biological activity driven by the seasons, the weather, and even the moon phase.

Observing biodiversity affords us the chance to feel like we have discovered something new. While we might not be able to travel as far and wide these days, having a chance to more deeply explore and appreciate the life thriving in our own backyard is equally powerful and exciting. I want to emphasize that the abundance of diversity I encountered above can be found directly adjacent to SW 34th Street and Archer Road, one of the busiest intersections in Gainesville. In an area defined by development that leads to physical encroachment and light pollution in native habitats, UF’s remnant natural areas offer an essential, albeit ever-shrinking, sanctuary for life. Biodiversity is everywhere, (re)discovering it might just require shifting our perspective.

* Did you know that at a distance of more than three meters Florida Barred Owls are effectively silent to the human ear? (1)

† I am by no means a beetle taxonomist; this is my best guess. Beetles have long been thought to be the most speciose order of animals (Order: Coleoptera), but maybe we have been underestimating how many species of ants, bees, and wasps (Order: Hymenoptera) there are. (2)