I am still having trouble believing that it is now March and that it has been nearly a year since my research plans in Panama fell apart due to the pandemic. That unforgettable year of 2020 doesn’t seem to abide by the normal rules of time, and for me at least, the 2020 vibes kept going well into 2021. At the beginning of February, I fell backwards off my Indo-board (a balance board I like to hop around on) and dislocated my elbow and fractured my forearm. I won’t get into the nitty gritty details but having my arm out of socket for three hours while waiting for the medics to put me back together again was not one of the more pleasant experiences I’ve had. So after royally messing up that sweet 360 jump I was trying to land, my left arm was in a cast for the month of February, which made typing, writing, coding and pretty much all of my work very difficult to do. 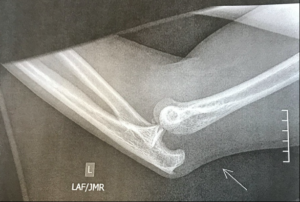 My arm on Feb. 4th. The humerus (bicep bone) is actually supposed to go inside the socket where the arrow is pointing. Who knew!

A positive result from this though was that being sidelined from some of my day-to-day tasks really forced me to take a step back and think about some of the big-picture concepts underpinning my research. This brought me back to thinking about my favorite paper in ecology, and one which has inspired a lot of my research interests as well as my general approach to trying to understand the natural world: G.E. Hutchinson’s Paradox of the Plankton. The paper provides an intriguing narrative of Hutchinson’s postulation of the simple but not so simple question of: why are there so many species.

In the early 1960s, when Hutchinson wrote this now-classic paper, the theory of “competitive exclusion” was widely acknowledged as a guiding principle for explaining species diversity patterns in nature. The theory proposes that species will compete for finite resources (food, light, nutrients etc.) in homogenous systems under equilibrium conditions, eventually leading to the extinction of the competitively inferior species. Essentially, the idea is that species which require the same resources cannot coexist at the same time and area. This inspired the more economically relevant, but just as pessimistic, theory of “The tragedy of the Commons,” proposed by Garret Hardin, which states that the depletion of shared resources will occur through individual self-interest. Both of these theories suggest that negative interactions among individuals, namely competition, drive patterns in resource abundance, population growth and in the case of competitive exclusion, patterns in biodiversity. 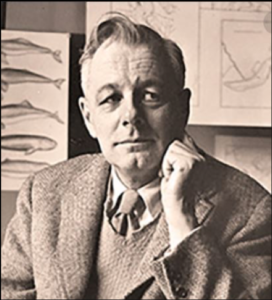 Although the theory of competitive exclusion is logical and justifiable on paper, Hutchinson pointed out one minor flaw in the theory, and hence, his ‘paradox’: competitive exclusion, or the dominance of one species over all others, doesn’t always happen. He uses a diverse assemblage of phytoplankton in an oligotrophic lake as an example of this paradox. Hutchinson had empirically studied these lakes for years before writing “Paradox” and had a strong understanding of the natural history of these systems. Despite similar habitat and resource requirements, and despite a homogenous environment (which rules out the niche diversification hypothesis), a diverse group of phytoplankton manage to happily live together and coinhabit the same waters in space and time, without one species driving the others into extinction. 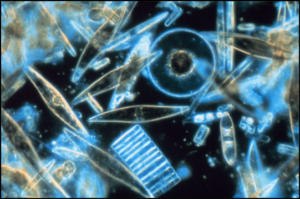 The ability of multiple species of plankton, which require similar resources, to coexist in a homogenous environment directly contradicts the competitive exclusion principle.

Hutchinson proposed several possible reasons for why the competitive exclusion principle would not apply to the plankton, such as commensal interactions whereby different plankton may benefit each other through vitamin excretion and uptake, differential predation on plankton species, and non-equilibrium conditions in the system. Many other solutions to Hutchinson’s ‘paradox’ have been proposed since the paper’s publication in 1961, and there are many possible reasons why multiple species of plankton (and other organisms) that require the same resources can coexist in ecosystems. However, for me at least, the biggest message of the paper doesn’t really have to do with plankton. Hutchinson admits the logical and analytical strengths of the competitive exclusion principle but uses the plankton and years of empirical observation as a surrogate for questioning the usefulness of theory when the assumptions it requires rarely holds true in the real world.

Revisiting Hutchinson’s made me excited to start up my own field work again. I don’t study plankton per se, but I am interested in how and under what circumstances certain assemblages exist in ecosystems. For example, in the Panamanian coral reefs I work in, multiple coral species can exist side by side in a relatively small spatial area. One of my experiments is trying to understand the degree in which zonation patterns of corals can be explained by competitive interactions among different species. That is, are certain species of corals competitively dominant over others? Reading “Paradox of the plankton” again gave me some new ideas for thinking about how to build off the results of this experiment when I return to Panama. My running hypothesis is that yes, competition can drive some of these patterns in species distributions, but that those interaction networks themselves may be mediated by other environmental factors and perturbations. 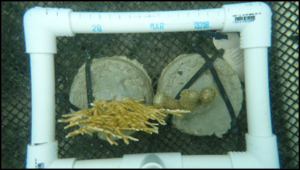 Some photos from my interaction experiment in Panama, examining interaction networks among different sessile invertebrates.

Having to type with one hand for this month has been annoying, and I got behind on some of my work which has now piled up a bit. But hurting my arm was refreshing in some ways and let me take a step back and come back to my projects with some new ideas and a fresh perspective. Despite feeling frustrated with how the pandemic has affected my research for the last year, reading Hutchinson’s paper again served as a good reminder for why I got into this field to begin with, and got me excited to try to find answers to that simple but not so simple question of “why are there so many species?” in my own system. And, just early this week, I got good news on my arm’s recovery, and am back to typing and coding like before (although removing a full bag of trash from the trash can still isn’t happening for me). Elbows, like research plans, can be put back together again, even if the process of falling apart really, really, hurts.

Equilibrium – an ecological state in balance where population sizes are kept within a sustainable range. Such a state in theory, can continue indefinitely.

Roy, S. & J. Chattopadhyay. 2007. Towards a resolution of ‘the paradox of the plankton: A brief overview of the proposed mechanisms.” Ecological complexity 4: 26-33.

Check out more posts on our Biodiversity Blog.