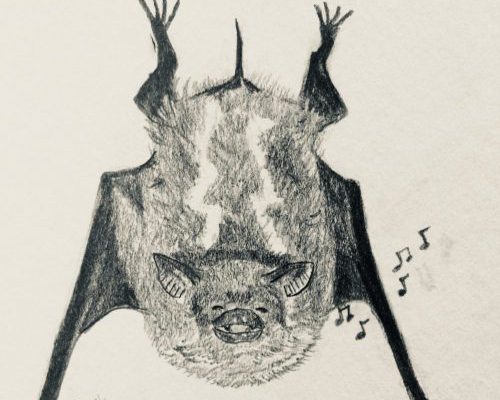 There are around 1300 species of bats in the world. In the Neotropics, approximately half of the bat species cannot be captured using mist-nets because the bats can detect and avoid them easily (Kalko et al. 2008). Most of these species correspond to echolocating bats, which rely on acoustic signal for their movement, feeding activities and social communication (Bader et al. 2015; Smotherman et al. 2016) .

Echolocating bats broadcast ultrasonic pulses to receive the echoes produced by surrounding objects and obtain information from those objects based on their echoes’ characteristics (Conner & Corcoran 2012). Several pulses constitute a call, short discrete vocalizations used not only for orientation and foraging but also for coordinating social behaviors within members of the same species that are located close to each other (Smotherman et al. 2016, Parsons and Szewczak, 2009). Echolocation calls vary from 8 to 215 kHz (Conner & Corcoran 2012); most of that range is not audible for humans (humans can hear only up to approximately 20 kHz). Bat species have specific vocal signatures that can be recorded using bat detectors and visualized in specific software for their identification (O’Farrell & Miller 1999).

For each bat species, call characteristics and wing morphology will determine its foraging success, for example in areas of dense vegetation (Schnitzler & Kalko 2001). Echolocation calls can even vary within a single species. Particularly, insectivorous bats present different echolocation phases during foraging activities: “search” is commonly used to identify species, “approach” is an increase in the number of calls per unit time once they detect prey, and the “terminal” phase when they emit a group of short calls at a high rate (Conner & Corcoran 2012), allowing the bat to obtain the exact location of its prey.

But, bats not only call, they also sing. Singing fulfills a social acoustic function, and it has not been well studied in bats. According to Catchpole & Slater (2008), songs are longer and more complex stereotyped call sequences generally related to courtship and territorial behaviors. The study undertaken by Smotherman et al. (2016) indicates that singing represents an advantage for bats owing to their flight capacity, territoriality, sexual selection, and dependence on acoustic communication. For bats, singing might be more economical in terms of energy use for defending their territories or obtaining access to mates instead of flying to achieve these goals (Smotherman et al. 2016). Some species have songs that serve multiple functions. For example, Tadarida brasiliensis, Brazilian or Mexican free-tailed bat, has songs with both territorial and courtship function contained in the same song, while in Saccopteryx bilineata, the sac-winged bat, males can recognize the sex of the individuals of their species as they approach the roost based on the characteristics of the echolocation pulses, so they can broadcast courtship songs for approaching females, or territorial songs for approaching males (Smotherman et al. 2016).

Recent improvements in the technology of bat detectors for the study of echolocation calls and the reduction of associated costs, together with an increase in the availability of reference libraries, have made acoustic studies more feasible (Williams-Guillen & Perfecto 2011). However, vocal signature for several species in the Neotropics still remains unknown. Joint efforts to have echolocation calls freely available are still needed. On the other hand, it is still unknown how singing is related to foraging site fidelity, as occurs in birds (Smotherman et al. 2016), and many more studies are required in this field.