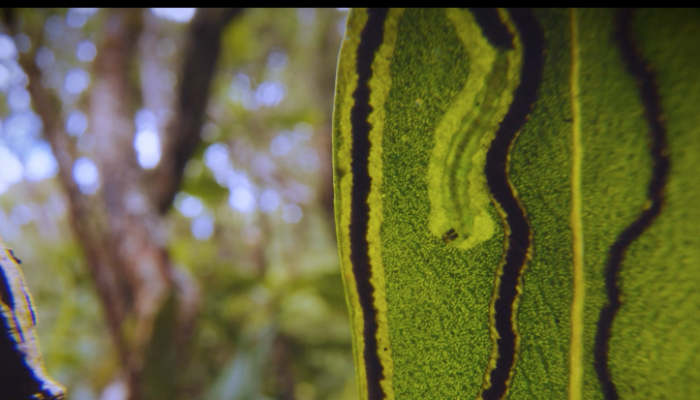 Appreciating biodiversity at all scales

Studying biodiversity at all scales is critical for understanding and preserving the many, and complicated, ecosystems of planet Earth. But, as many researchers will attest, it can be difficult to communicate to the public the importance of organisms lacking economic (e.g. crop plants) or aesthetic (e.g. Monarch butterflies) significance.

So, what do you do when you study a micromoth that is smaller than an eyelash? University of Florida Ph.D. student Chris Johns decided to make a movie about it.

I’ve been aware of Chris’ research and photography for the last few years due to his presence in both the UF Biology Department and Gainesville community as a whole (perhaps you’ve seen some of his National Geographic worthy photos at art shows around town?). But I recently learned that Chris had taken his biodiversity outreach to a new level, with a documentary film about his work that premiered at the Hawaii International Film Festival this week.

The film will serve as one of Chris’ dissertation chapters, according to Entomology and Biology Professor Akito Kawahara, who is Chris’ Ph.D. advisor.

Chris works with the genus Philodoria, a teeny, tiny moth affectionately known as leaf miners. The miniature caterpillars of these miniature moths live inside the leaves of their host plants, 13 different plant species that are all endemic to Hawai’i, tunneling around until they are ready emerge to begin metamorphosis. Philodoria only occur in Hawai‘i and recent research suggests that, like many Hawaiian insects, they are threatened with extinction. Most Philodoria moth species can only feed on a single species of Hawaiian plant and some of these Hawaiian plants are themselves endangered. These moths were thought to be extinct in Hawai’i, but through laborious fieldwork Chris re-discovered them in 2013. This in and of itself makes a good story, but Chris was able to truly capture the conservation significance and evolutionary intrigue of these charismatic moths in his documentary film, Leaf Miners: A Note from the Edge of Conservation.

Chris explained why outreach is such a central part of his biodiversity research.

“As a person who didn’t grow up with a strong natural affinity for science and nature, I empathize with people who don’t readily appreciate biodiversity. I was lucky enough to find an interest in these things later in life. Sharing this with other people—engendering that appreciation—is thus really powerful for me.

“Our work with Philodoria is kind of my personal test case in that. These moths are small, no one will ever see them, they don’t do anything particularly important for humans, they’re purely and solely a very small component of life on Earth. When you can get people to care about something small like that, it’s an amazing feeling. It makes biodiversity conservation as a whole seem possible to me.”

This film takes a look at one hidden corner of environmental conservation work and why some say it’s important to preserve even the smallest of organisms, like microscopic moths only found in Hawaii. At the intersections between Hawaii culture, science, and the environment, it’s a story about appreciating the small things and their right to exist.

Additionally, National Geographic recently featured Chris’ work and made a video highlighting Chris, his research, and Chris’ videography. Check it out here: http://news.nationalgeographic.com/2016/11/micromoths-hawaii-plants-endangered/.